Indium is a transition metal with valuable semiconducting
properties. It forms a transparent conducting ceramic in
combination with tin oxide, which is used in the microelectronics
industry to form capacitors, resistors, and other components.

Indium is a transition metal with valuable semiconducting properties. It forms a transparent conducting ceramic in combination with tin oxide, which is used in the microelectronics industry to form capacitors, resistors, and other components. The growing demand for semiconductors fr om the electronics industry has been propelling the Indium oxide market, wh ere it is used in nanowires, batteries, electrically charged nanoparticles, and optical and antistatic coatings. Electrically charged ceramics are also used in electronic aircraft and submarine parts, which have to withstand extreme pressures and temperatures.

Indium plays an important role in the global energy transition, due to the growing solar energy industry. Indium is used in synthesising the semiconductor copper Indium gallium selenide in the manufacture of thin film solar cells and liquid crystal displays (LCDs). Currently, about 45% of global production is used to make Indium tin oxide for solar cells and LCDs. In both applications it is used to establish an electric current over the device and pass light through it. In 2020 Indium was added to the EU Critical Raw Materials List.

The Indium market is categorized into primary, secondary, and type III, on the basis of product. A major portion of the Indium is used as the primary product for manufacturing television and computer screens, mobile phones, photovoltaic solar cells, and other touchscreen devices.

In terms of application, the Indium market consists of Indium tin oxides (ITO), semiconductors, solders & alloys, and others. ITOs account for a significant share of the Indium market, due to their increasing usage in the compound used to prepare transparent conductive coatings for light-emitting diode (LED) screens, touch panels, and digital cameras. Additionally, they are used as a transparent heating glass in de-icing systems, and also added to varnishes, adhesives, and plastic films to increase conductivity. Thus the Indium market has been driven by growing demand for electronics, including the thin-film solar photovoltaic and semiconductor markets, with emerging economies such as China and India set to add to this.

The top producers of Indium are China (40%), Korea (31%), Canada (9%), and Japan (9%). There is no Indium production in the US. On the demand side, the increased use of LCD displays (TVs, smartphones, tablets, etc) continues to drive the global Indium market. Mordor Intelligence valued the display panel market at US$139bn in 2020 and expects it to reach US$178bn by 2026, a CAGR of 4.2%. Display technologies have evolved rapidly over the years, aided by technological advances offering higher resolution and lower power consumption.

The global production of Indium is only about 800 tonnes per year – an amount so small that this soft, silvery metal is not traded on any of the world’s metal exchanges. Because of this, the actions of a single supplier can have a significant impact on price. According to Richard Stevenson, the editor of Compound Semiconductor magazine, over 2002-05, the price of Indium rocketed from US$100/tonne to around 10 times that figure, due to the closure of a major French refinery, coupled with rising demand. More recently, Indium’s price fell from around US$500 to US$300/tonne, after the Fanya Metal Exchange, a trading platform backed by the Chinese government, collapsed in 2015 amid allegations of large-scale fraud. Max Frenzel, a researcher at Germany’s Helmholtz-Zentrum Dresden-Rossendorf who has studied Indium, gallium and germanium supplies, explains that the Fanya failure was significant, because it had reportedly amassed a very large stock of Indium. The official figure is 3,600 tonnes, although Franzel warns that it is hard to know whether this number is realistic. For the figure to be accurate, he notes, the exchange “would have had to amass all the production in the whole of China for more than 10 years”.

Kitco, the world’s largest online provider of precious metals, provides historical Indium prices from May 2016. As the chart below shows, the price has fluctuated significantly over the past five years, peaking at US$491/kg in April 2018, driven by increased demand for LCDs. From April 2018, the Indium price reacted to a period of low demand from the Indium tin oxide industry and a significant oversupply of China's Indium market. By late December 2020, under further pressure following the Covid-19 pandemic, Indium prices had fallen 39%, from a high of US$491/kg to what appeared to be a support level of US$300/kg. However, they have since recovered to US$340/kg in April 2021. 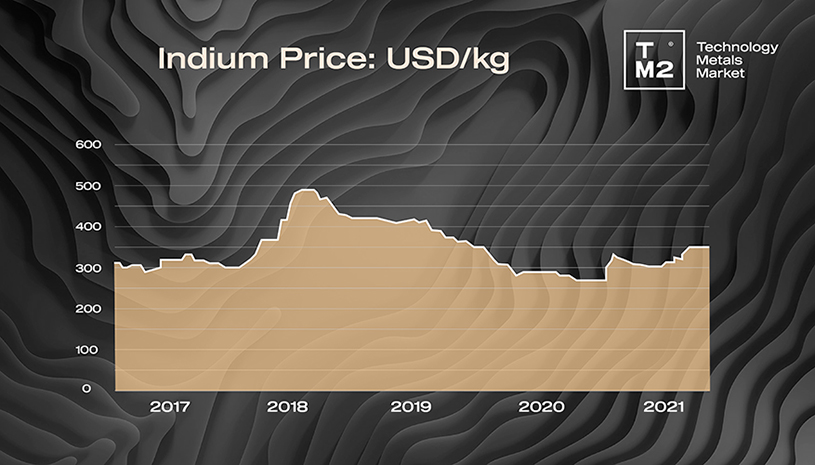 Display technologies and copper Indium gallium selenide (CIGS) solar cells have evolved over the years, aided by technological developments, and now offer higher resolution and lower power consumption than previously. Mordor Intelligence estimated the display panel market at US$139.1bn in 2020, expected to reach US$178.2bn by 2026, a CAGR of 4.2%.