Osmium is a transition metal, one of the platinum group metals (PGMs), along with platinum, palladium, rhodium, iridium, and ruthenium. It is the rarest element of the stable elements: its average abundance in the Earth’s crust is about 1g per 200 tonnes, and demand volumes are currently tiny, despite the fact that various Osmium compounds have excellent catalytic properties.

The Osmium market is difficult to assess, given poor global statistics, low demand and the fact that extracting it is complex. Osmium is often alloyed with other metals used in high-wear applications: alloys such as osmiridium are very durable, and are mainly used in the tips of fountain pens, phonograph needles, instrument pivots, and electrical contacts. Osmium tetroxide has been used in fingerprint detection and in staining fatty tissue for microscope slides. As a strong oxidant, it cross-links lipids by fixing biological membranes in place.

An alloy of 90% platinum and 10% osmium (90/10) is used in surgical implants such as pacemakers and replacement pulmonary valves. Thus, osmium is used in microscope slides, medical implants, the mirrors of UV spectrometers in space, and for stabilizing biological membranes in tissue samples.

According to this paper in Angewandte Chemie, researchers from the University of Warwick have for the first time been able to track Osmium in a single cancer cell at a scale of 100nm, giving the metal promising potential applications in cancer treatment.

In more recent studies published at the end of June 2021 in the Chemical Science Journal Osmium as been mentioned as being able to modulate cell machinery in way that interferes and fights cancer progression.

In other applications, the Osmium-Institute, expects demand pressure to emerge from the jewelry and watch industry, especially in India, China and Southeast Asia, adding a new strand to global demand. Crystalized Osmium could become highly demanded in the jewelry industry as a substitute for diamonds: unlike the traditional stone, Osmium crystals can only be formed in a laboratory, have stronger abrasion resistance, and reportedly refract light at greater distances.

Osmium-187 is measured in an Osmium-187/Osmium-188 ratio that has been used extensively in dating terrestrial as well as meteoric rocks to measure the intensity of continental weathering over geologic time, and to fix minimum ages for stabilization of the mantle roots of continental cratons .

Osmium is extracted in vanishingly small quantities as a byproduct of nickel and platinum mining. According to Heraeus Precious Metals, worldwide annual osmium production varies between 150-1,000kg. Turkey, with an estimated 127,000 tons of osmium-containing ores, has the world's largest known reserves. Bulgaria also has substantial reserves, of about 2,500 tons. This transition metal is also found in iridiosmium, a naturally occurring alloy of iridium and osmium, in platinum-bearing river sands in the Ural Mountains, and North and South America. It also occurs in nickel-bearing ores found in the Sudbury, Ontario region with other platinum group metals. Even though the quantity of platinum metals found in these ores is small, the large volume of nickel ores processed makes commercial recovery possible. Osmium World-Council estimates annual production since 2019 at 1,000kg. The bulk is used for crystallization, with the remainder used in industry and academic research in the form of Osmium compounds.

The growth of the global Osmium market is limited by the rarity and high cost of the metal. According to Engelhard Industrial Bullion, Osmium cost approximately US$400/oz in the US in 2018, the most recent available price. According to Osmium-Preis, since April 2017 the spot price of Crystalline osmium has significantly increased from €797/g to the current level of €1,501/g (€42,100/oz) on May 12, 2021. The stable price growth over the past five years, despite the Covid pandemic and global economic slowdown, demonstrates the fundamentally sound demand and pricing outlook in 2021. 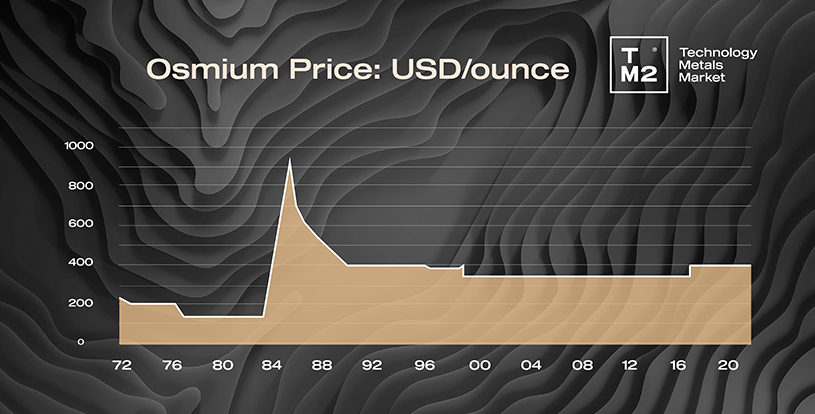 Like other PGMs, osmium can be used as a catalyst and has been used for that purpose in the past. However, it is not as useful a catalyst as rhodium. Therefore it is important to look at the other useful applications osmium has. As can be seen in figure 1, only about 25% of osmium goes into catalyst use. The rest finds usage in chemical manufacturing, electricals and electronics, and other uses which, for example, includes the jewelry sector.

Due to its high price, osmium is not generally preferred over other metals for industrial applications. However, when durability and hardness are critical, osmium is preferred, mainly because of its high density. Osmium and osmium alloys are often used in fountain pen tips, instrument pivots, phonographic scanning needles, and electrical contacts, to name a few.

Heraeus predicts that an amount of 2.5 to 3 tons of Platinum is being used in chemotherapy and other forms of cancer treatment yearly. With multiple studies positioning Osmium as a viable substitute in this procedure this can mean that Osmium demand can shift by a factor of 2 or 3 because of this sector alone.

The demand for osmium is likely to increase in the next five years and is mainly driven by sustainable development in the global chemical industry. Therefore the CAGR over the next few years is likely to see a substantial increase. North America should be the dominant force when it comes to consumption, followed by Europe in second place.