Platinum is a heavy but malleable and ductile metal. Only gold and silver are easier to mold and work with. It is considered a strategic and critical metal due to it being necessary for many industrial and technological processes in healthcare, environmental, renewable power, and manufacturing applications. Currently, there are no feasible alternatives for platinum’s catalytic properties. As a result, the metal  is vital in reducing air pollution and producing renewable hydrogen. Limited supply and increased investment demand due to the green hydrogen narrative could be a powerful catalyst for a secular bull market in platinum in 2021. Platinum’s role in the hydrogen economy is crucial as it’s often used in fuel cells and to produce green hydrogen through the electrolysis of water using renewable energy, according to research by the World Platinum Investment Council (WPIC).

The biggest part of the platinum demand comes fr om the automotive industry, the World Platinum Investment Council has equated platinum demand from auto catalysts to be between 31–43% of total platinum demand in the last 5 years. Reducing vehicle emissions is the most important direction of platinum usage both now and in the long term. Platinum in spark plugs and O2 sensors supports more efficient engines. The WPIC noted, the metal supports diesel cars which are on average 20% more CO2 efficient than an average gasoline car. Euro 6d (RDE) and China 6 compliant catalysts use more platinum per car to achieve the lower emissions requirements. Platinum’s superior catalytic and conductive properties in fuel cells turn hydrogen and air into water producing electricity to power electric cars with zero emissions. Platinum's other industrial uses and global annual jewelry demand account for between 22–27% and 24–32% of total platinum demand over the last 5 year, respectively. Investment is the most variable factor over the past five years, ranging between 0–20% of total demand (net investment, excluding increases or decreases in above ground stocks).

According to the U.S. Geological Survey, Mineral Commodity Summaries (January 2021), world resources of PGMs are estimated to total around 69 million kilograms, however it can reach 100 million kilograms based on bold assumptions. The largest reserves are in the Bushveld Complex in South Africa. Other major deposits include the Sudbury deposit of Ontario, Canada, and the Norilsk-Talnakh deposit of Siberia in Russia. Within the United States the largest deposit is the Stillwater Complex in Montana, but this is substantially smaller than the deposits cited above. The world’s largest producers of platinum are South Africa, Russia, Zimbabwe, and Canada.

In 2020 the platinum market deficit of 932 koz. (26 421 kilograms ) is explained by the lower supply due to COVID-19-related mine closures, ACP outages and reduced recycling. This far outweighed the pandemic-driven fall in demand from the automotive, jewelry and industrial sectors, which fall was partially offset by increased investment demand. According to the PGM market report May 2021, during 2019–2020, over 2.1 million oz. of physical platinum investment products were purchased by investors, mainly in the form of ETFs and platinum bars purchased ‘over the counter’ by retail investors in Japan. This sustained surge of investment appears to have been driven by a number of distinct factors. Platinum probably benefited from an overspill of ‘safe haven’ buying in gold, as investors reacted to economic threats such as the US-China trade war in 2019 and the Covid pandemic in 2020.

The Chinese platinum jewelry demand started to improve in the second half of 2020, as high gold prices encouraged retailers to devote more counter space to platinum jewelry. Chinese jewelry fabrication also increased during the first quarter of 2021 but this was primarily due to exceptional Covid-related weakness in early 2020, and does not necessarily reflect an increase in underlying consumer demand.

Johnson Matthey expects that demand for platinum in autocatalysts will bounce back strongly in 2021, with consumption this year matching or slightly exceeding the 2019 level, and platinum taking an increased share of total autocatalyst PGM demand. This is despite continued weakness in the European light duty diesel sector, wh ere diesel market share is expected to shrink to 33%, down from a peak of around 50% only six years ago. Globally, platinum use in diesel cars will rise in line with production volumes (forecast to increase by around 14% in 2021, following a 25% decline last year) but will still remain at least 10% below pre-pandemic levels.

Industrial demand for platinum should remain robust in 2021 based on the PGM market report May 2021, with major applications in the chemicals, glassmaking and electronics sectors continuing to enjoy strong demand.

Since March 2020 the platinum futures price has increased significantly from US$ 718 to the current level of US$ 1171 (07.06.2021), much of it occurring after the United States presidential election in November 2020. This is because the Biden administration is expected to increasingly shift the U.S. from an economy reliant on fossil fuels to one driven by renewable-energy resources. Europe and China will also drive the future platinum demand due to their zero-emissions goals. Because of this many investors are already moving their assets away from fossil-fuel producers and toward companies operating in renewable-energy industries.

During the last 5 years low platinum prices reinforced perceptions that platinum offered ‘value for money’ in comparison with gold and palladium, while investor sentiment was bolstered by the near-term prospect of additional demand in gasoline autocatalysts and longer-term potential for platinum to play a key role in the hydrogen economy. ETF holdings had formed a record level of nearly 4 million oz at the beginning of 2021, while Japanese buyers had accumulated a net 1.9 million oz of platinum bars since 2015. With the platinum price ascending to a six-year high of just over US$ 1,300 in mid-February 2021, and then traded around US$ 1,200 between February and May 2021. In early June, platinum traded at around US$ 1100 per ounce.

For now, if the positive momentum continues, prices could again move towards the US$ 1,300 level in the following months after taking a short-term breather in the second or third quarter in 2021. Stabilization of world economics after Covid-19 pandemic, growing investment demand, and increasing the scale of the renewable-energy industry are powerful levers and price growth stimulators for platinum. 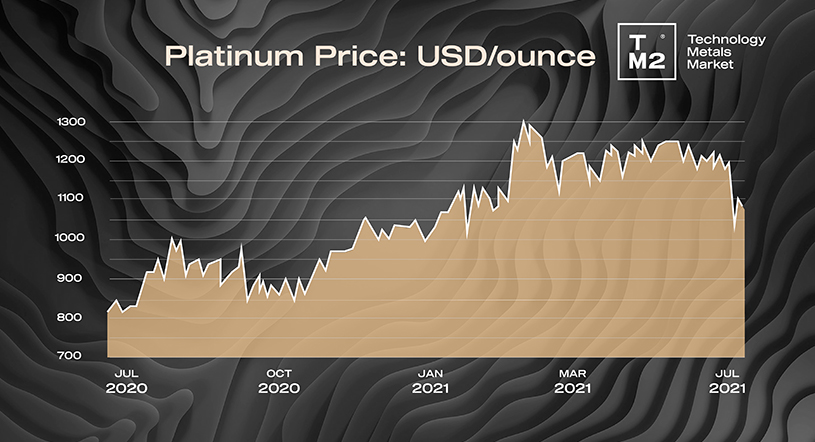 The global focus on climate change and environmental policy has accelerated the development of detailed and coordinated global decarbonisation plans. The focus on decarbonisation and clean energy generation has been central to recent economic stimulus policies announced by the US, Europe, and China. All major global economic blocs are now committed to carbon neutrality by 2050 to 2060. Decarbonisation strategies will be achieved by the development of a competitive hydrogen economy, and production of green hydrogen. Hydrogen is targeted to meet 25% of global energy needs by 2050, being used to generate electricity, drive heavy industry, fuel vehicles and heat homes. Platinum’s role in the hydrogen economy is crucial, it is used in fuel cell electric vehicle (FCEV) stacks and in proton exchange membrane (PEM) electrolysers using polymer electrolyte to produce green hydrogen. Current hydrogen capacity investment plans, for both PEM and alkaline capacity, will be key to reducing the price of hydrogen, in turn driving up FCEV penetration and thus demand for platinum. The long-term demand potential for platinum now looks exceptionally strong, with the combination of platinum for palladium substitution in automotive uses, and development of hydrogen generation and FCEV applications, potentially creating over 1 moz of additional platinum demand by 2025, rising to over 2 moz by 2030.

According to the WPIC Quarterly Report Q1 2021, for 2021 total platinum supply is forecast to rise 16% year-on-year to 7,883 koz. However, it will remain below pre-pandemic 2019 levels, while total platinum demand is expected to rise by 5% year-on-year to 8,041 koz. As a result, the platinum market is forecast to remain in deficit in 2021, for the third consecutive year. Despite WPIC forecast total investment demand in 2021 being 53% lower than the record levels in 2020, bar and coin demand and ETF demand are expected to remain robust at 436 koz and 250 koz respectively. The accelerating global economic recovery from the negative impacts of the COVID-19 pandemic in 2020, combined with platinum’s compelling demand outlook, is expected to provide a strong incentive for investors to continue to expand platinum exposure. Moreover, further strong growth in the Chinese fuel cell industry over the next few years will drive and stimulate sustainable platinum demand.