Rhenium is a crucial alloying element for its special strengthening effects through very high melting point, high density and an extremely high elastic modulus. Rhenium is used as an additive in making superalloys together with iron, cobalt, nickel, tungsten and molybdenum. The addition of rhenium improves the overall creep strength of a superalloy, making it an excellent material for jet engine parts and gas turbine engines.

Rhenium applications in medical technology, chemical industry, superalloy and aerospace industries will also add to rhenium demand in the near future.

The Rhenium market is driven by its uses in aerospace superalloys, catalysts and healthcare. Aerospace dominates, as modern jet engines usually rely on Rhenium to improve the creep resistance of superalloys, resulting in more durable components able to withstand higher temperatures. In turn, this leads to fuel efficiency.

The global healthcare industry has been expanding Rhenium usage in various medical devices. The rising elderly population across the globe, high prevalence of chronic diseases, and advances in innovative digital technologies, have led to a range of applications, given Rhenium’s unique properties. Rhenium-188 is a high energy-emitting radioisotope obtained from the tungsten-188 generator. It is applied in a wide range of therapeutic applications such as nuclear medicine, preparation of radiopharmaceuticals for radionuclide therapy, oncology, interventional radiology, and cardiology. Diseases such as bone metastasis, rheumatoid arthritis, and primary cancers use rhenium-188 for diagnosis and treatment. Rhenium-188 is used to produce phosphonates, antibodies, peptides, and lipiodol. The high energy generated from the β-emission of rhenium-188 is effective in treating tumors. It is used in the new class of implant material and Rhenium-SCT® (Skin Cancer Therapy) devices, a non-invasive, painless therapy for the treatment of NMSCs (non-melanoma skin cancers).

Annual world mine production of Rhenium is around 50 tonnes, based on the US Geological Survey. Nearly all primary (ie non-recycled) Rhenium production is a byproduct of copper mining, and about 80% is recovered from the flue dust produced during the roasting of molybdenite concentrates from porphyry copper deposits. Molybdenite in porphyry copper deposits can contain from hundreds to several thousand grams of Rhenium per metric ton, although grades of these deposits range from less than 0.1g/tonne to about 0.6g/tonne. Continental-arc porphyry copper-molybdenum-gold deposits supply most of the world’s Rhenium production and have large inferred Rhenium resources. Porphyry copper mines in Chile account for about 55% of the world’s mine production of Rhenium. Rhenium is also recovered from porphyry copper deposits in the United States, Armenia, Kazakhstan, Mexico, Peru, Russia, and Uzbekistan. Sediment-hosted strata-bound copper deposits in Kazakhstan (of the sandstone type) and in Poland (of the reduced-facies, or Kupferschiefer, type) account for most other Rhenium produced by mining. These types of deposits also have large amounts of identified Rhenium resources.

According to the USGS, in 2020, Rhenium production in the United States decreased by 6% compared to 2019. A Rhenium recovery facility in Utah was closed in 2019; however, the company announced the possibility of reopening the facility in the near future. During 2020, the United States continued to rely on imports (mainly from Canada, Chile, Germany, and Kazakhstan) for much of its supply of Rhenium. Imports of ammonium perrhenate (APR), which contains Rhenium, decreased by 16% in 2020 compared with 2019, while imports of rhenium metal decreased by 57%, partly due to lower aerospace consumption due to reduced plane manufacturing during the pandemic. Finally, mine production of Rhenium-containing feedstocks was also lower in 2020.

According to Lipmann Walton, in 1979-80 rhenium prices peaked at about $3,300/kg, as European and US laws on cleaner air led to an expansion in demand for high-octane lead-free gasoline. Subsequently, the end of the Soviet Union saw the first flows of Rhenium from East to West, largely from Kazakhstan, forcing prices down to a low of $300/kg in 1996. Just twelve years later, in August 2008, Rhenium reached a peak of $12,000/kg, as a result of the combined demand for aerospace and industrial gas turbines, as well as the prospects (since abandoned) of Rhenium being used in catalyst formulations for gas-to-liquids technology (GTL).

The biggest recent structural change to the market came about after 2008 when, thanks to the incentive provided by high prices, ways were found to extract Rhenium from spent nickel alloy, along with improved methods to clean spent superalloys for reverting into new melts. As a result of this the total Rhenium supply rose by over 50% and led to a steady fall in prices over the following decade. At the time of writing (April 2021), with Rhenium prices at circa $1,256/kg, a number of scrap recovery works have closed, suggesting the supply base may contract again, which could lead to higher prices.

Between March 2020 and April 2021 Rhenium prices decreased 23%, from $1,630 to $1,256/kg, due to weak demand from key industries. As a result, it is difficult to identify the fundamental support level. Continued low prices, as well as the global pandemic, caused many Rhenium recyclers and primary production facilities to cease activities and focus on more-profitable metals.

We expect the recovery in the global economy after the pandemic will stabilize the price near the current level, and with the expected growth of rhenium demand providing the fundamental basis for positive price dynamics in 2021-26. 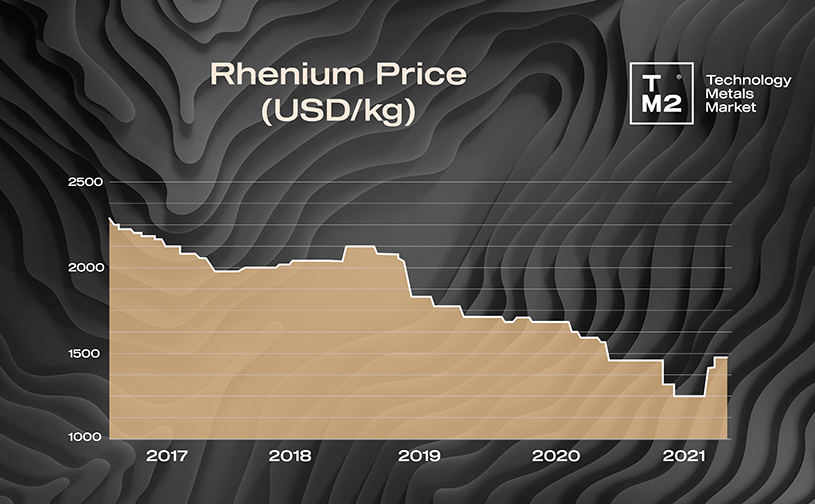 According to this report, the Rhenium market should grow USD$49m during 2021-25, a CAGR of 10.78%. Technavio's report offers a detailed analysis of the impact of the pandemic on the Rhenium market, offering an optimistic, probable, and pessimistic scenario, but over expecting a negative immediate outlook given the pandemic.

OncoBeta® GmbH, a commercial-stage Medical Device Company specializing in innovative epidermal radioisotope therapies for Non-Melanocytic Skin Cancers (NMSCs) announced that it has signed an exclusive sales referral and distribution agreement with Grupo RPH to start Rhenium-SCT® treatments in Brazil. Growing usage of rhenium in the healthcare industry is expected to drive rhenium demand in the medical equipment sector by 2028.

Global Market Insights valued the aerospace superalloys market at US$1.98bn in 2020, growing at a CAGR of 9.2% from 2021-27. The major engine makers General Electric and Pratt & Whitney are the largest buyers of rhenium globally. Pratt & Whitney’s new geared turbofan engines are set to take the largest market share for single-aisle aircraft built over the next 20–30 years. The group’s PW1,000G series requires some 12lb (5.4kg) of rhenium per engine. It is set to be installed on nearly half Airbus A320neo planes ordered, with a backlog in excess of 4,000 planes.