Rhodium, one of six PGMs, is a silver-white metallic element that is highly reflective and strongly resistant to corrosion. It is considered the rarest and most valuable precious metal in the world occurring as low as 1 part per 200 million in the earth's crust — far more so than gold or platinum. Rhodium is obtained generally as a by-product of copper and nickel refining. Rhodium’s primary use is in catalytic converters of automobiles, where it reduces the amount of nitrogen oxides (NOx) exhaust gases emitted into the atmosphere. In 2019, almost 90% of rhodium demand was from the auto-catalyst sector. Rhodium is a very special metal in terms of its performance in converting NOx into harmless gases, and will continue to be the metal of choice for the control of NOx.

Rhodium is often described as a critical strategic metal. These metals are used in a wide diversity of end-use applications, from capacitors for consumer electronics and metallic cathodes for rechargeable batteries to photovoltaic solar cells and semiconductor materials. They are critical to the future growth of electric vehicles, energy storage, and renewable energy. Participants in the rhodium market include primary producers, secondary refiners, and recyclers of rhodium wishing to market their products. Autocatalytic uses predominantly drive demand. Other consumer related applications include tooling for the glass manufacturing sector and electronics. Some rhodium is also used for jewelry.

The major primary suppliers of rhodium are South Africa, with about 80-85% of the production, Russia, Zimbabwe, Canada, and the United States. Annual primary rhodium production in 2020 was approximately 18.2 tons. Based on Johnson Matthey PGM Market Report (February 2021) rhodium total rhodium production formed 28.7 tons at the end of 2020. Rhodium demand exceeded supply by 2.6 tons in 2020, the rhodium deficit was around 14% on the market.

In the automotive industry, use of rhodium is primarily driven by emissions legislation: rhodium remains far and away the best catalyst for aftertreatment of gasoline NOx emissions. With NOx emissions limits continuing to tighten in major global markets, and the implementation of Real Driving Emissions (RDE) testing in Europe, rhodium loadings on gasoline vehicles have risen significantly over the past three years. Globally, we estimate that the average rhodium content of a light gasoline vehicle in 2020 was up by nearly 10% versus the previous year, and by more than 40% since 2017. Loading increases have been especially significant in Europe and China. Under Euro 6d legislation, being implemented in phases between 2017 and 2022, RDE testing has been rolled out and is being made progressively more stringent. This has been positive for demand for all the autocatalyst pgm, but the impact has been greatest for rhodium, because RDE focuses on NOx emissions.

The average nominal price of rhodium over the last 20 years is approximately $2,200/oz. Rhodium has seen extraordinary price movements over the last two years, climbing from below $3,000 in January 2019 to a new record of $17,000 at the end of December 2020. The market saw extreme volatility during 2020: in March, rhodium lost nearly two-thirds of its value, collapsing from a (then record) high of $13,800 to a low of $5,500 over a period of less than two weeks. However, as auto production began to recover from Covid related disruption, rhodium embarked on another steep climb in August, surpassing its March peak by late September, and surging above $15,000 in November after Anglo American Platinum announced a new closure at its converter plant (ACP). Although the ACP resumed operations in early December, rhodium continued to surge higher, reaching $17,000 on 31st December 2020.

Historically, rhodium trading volumes can vary significantly with periods of low volume and surges in between. Rhodium prices are expected to range between US$ 13000/oz to US$ 21000/oz at least until the end of 2021. Assuming that rhodium buyers decide to increase storage reserves for hedging against future deficit and price growth during Q1 2021, we can conclude that the current rhodium price around US$ 21000/oz includes a speculative nature. The level of technical support at US$ 13000/oz on the one-year graph of rhodium price below confirms it. In July 2021, the rhodium price had a big drop to the level US$ 18400/oz which may be the beginning of a much deeper correction to US$ 13000/oz. However, it is not excluded, that a stabilization in the global economy in 2021 will allow prices to gain a foothold at the level US$ 15000. 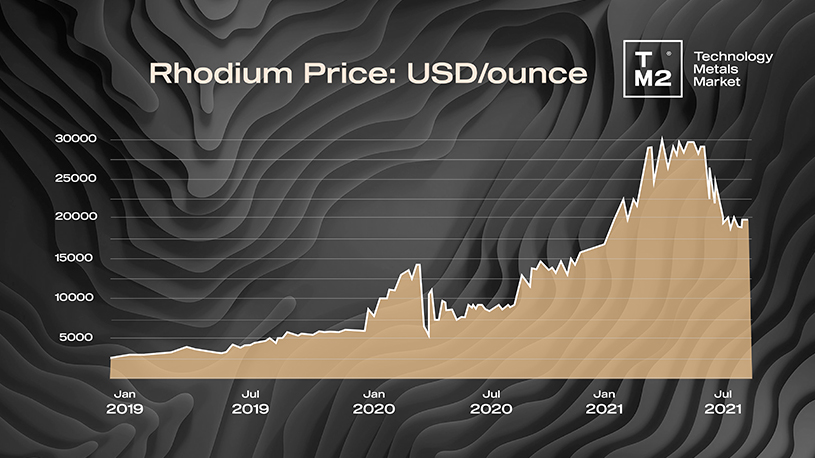 In the global Refinery segment, USA, Canada, Japan, China and Europe will drive the 4.5% CAGR estimated for this segment. These regional markets accounting for a combined market size of US$ 412.8 Million in the year 2020 will reach a projected size of US$ 562.3 Million by the close of the analysis period. China will remain among the fastest growing in this cluster of regional markets. Led by countries such as Australia, India, and South Korea, the market in Asia-Pacific is forecast to reach US$ 387.8 Million by the year 2027, while Latin America will expand at a 5.2% CAGR through the analysis period.