Silver is a lustrous soft metal that is very malleable and ductile. This makes it a very versatile metal and used in many sectors. It has the highest electrical and thermal conductivity of any metal along with the highest light reflectance level. Some of its uses include industrial fabrication, electrical applications such as conductors, switches, contacts ,and fuses and it is a core element in the manufacturing of solar panels. In electronics, industrial silver is used mainly in multi-layer ceramic capacitors, in the manufacturing of membrane switches, in silvered film, in electrically heated automobile windshields, in conductive adhesives, and in the preparation of thick-film pastes.

Silver has been used in many industrial applications including solar panels, the automotive industry, brazing and soldering and these are some of the sectors where demand for silver is currently increasing. The use of silver in the fabrication of photovoltaic cells, more commonly known as solar panels or solar cells for solar power, is seen as an area of rapid growth in the short to medium term. Using silver as conductive ink, photovoltaic cells transform sunlight into electricity. In 2020, photovoltaic demand for silver rose to 101 million ounces, up from 98.7 million ounces the previous year. In the automotive industry every electrical action in a modern car is activated with silver-coated contacts. Adding silver to the process of soldering or brazing helps produce smooth, leak-tight and corrosion-resistant joints when combining metal parts. In addition, silver-brazing alloys are used widely in everything from air conditioning and refrigeration to electric power distribution.

Mexico is the largest mining producer of silver globally, with Peru and China rounding out the top three. According to the U.S. Geological Survey, Mineral Commodity Summaries (January 2021), the global silver mine production was 25,000 metric tons in 2020, a 6% decrease from 2019. That was mainly due to shutdowns of factories in several countries due to the COVID-19 pandemic.

Based on the World Silver Survey 2021, in 2020, global mine production suffered its biggest decline of the last decade, falling by 5.9% to 784.4Moz (24,399 tons) compared with 2019. Temporary mine closures in several major silver producing countries in the first half of the year as a direct result of the COVID-19 pandemic is the main reason for the downturn. However, global silver recycling increased for a second straight year in 2020, rising by a notable 7% to a seven-year high of 182.1Moz (5,665 tons). High silver prices were an important catalyst, with much of the increased volumes last year coming from jewelry and silverware, especially in India.

In 2020, global physical silver demand decreased to 896.1 million ounces from 995.4 million ounces in 2019 according to the World Silver Survey 2021. The biggest drop in consumption came from the silver jewelry and silverware segments; however, last year brought greater silver consumption in the form of investment through silver bars and silver coins, as per the Silver Institute’s latest supply and demand report.

Historically, silver was considered a safe haven asset that generally fares well in times of turmoil, and the past year has been packed with tense political events — not to mention the coronavirus pandemic and the resulting global economic impact. Many investors are confused by the silver price movement from June 2020 to June 2021 alone; silver price levels range from US$ 17/oz to US$ 29.50/oz. The price of silver jumped significantly since the start of 2020 compared to the year before mainly due to increased investment interest and not increased end-user demand. Sizeable investments were recorded both from institutional and retail investors that increased their silver holdings to over one billion ounces for the first time. In late January and the beginning of February, silver saw an attempt from Reddit investors to squeeze the price of silver. This initially pushed the price of silver above $30, for the first time since 2013, but shortly after it retreated. 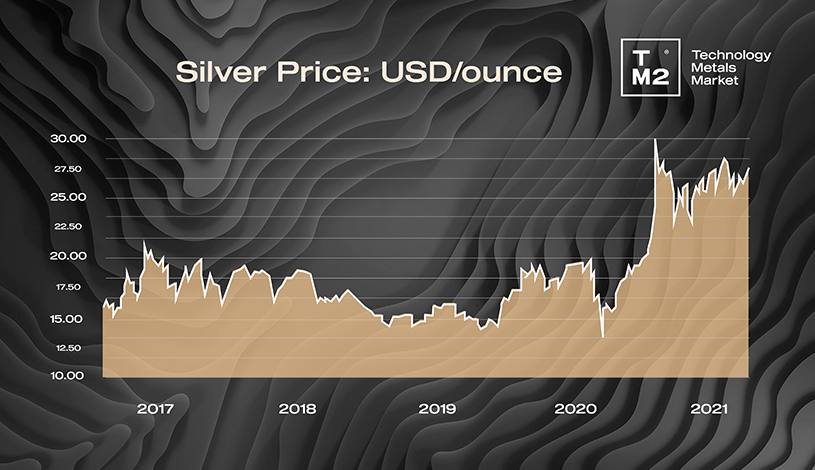 According to the World Silver Survey 2021 strong growth in silver mine production this year is expected to be followed by continued growth in the medium term. It will be driven by increased output from a number of major operating mines alongside new projects, with a significant contribution coming from primary silver operations in Mexico. Recycling looks likely to fall in 2022 and for the next few years after due to jewelry and silverware scrap’s reaction to falling prices.

Silver demand should enjoy solid growth from 2022 onwards from the post-COVID re-opening of economies. Silver’s end-use in the automotive arena should grow fast, for example, as vehicle output bounces back and as we see a surge for electric vehicles, which have a much higher silver loading than conventional vehicles. The proliferation of 5G devices and networks will also act as a useful boost, as could induction chargers and cold sintering powders.

Physical investment in silver is hard to forecast as various markets could see contrasting rates of profit taking and bargain hunting in reaction to price moves. However, according to the World Silver Survey 2021, no structural changes are expected in silver market balance in either of its core US and Indian markets that might threaten net investor purchases. Jewelry demand has a clearer path to steady gains looking ahead as economic activity normalizes and growth should flow through medium easing in silver prices. Western sales of branded items also show promise, as does India through the rising popularity of sterling silver among organized retailers. Increases for silverware led by India and driven by softer prices are also expected in the next few years, with no structural change on the horizon as a major threat.

According to Heraeus, silver is likely to outperform gold again in 2021 and is expected to be trading at a range between $21/oz to $36/oz. The silver is, as of writing, trading at $28.26/oz. Industrial demand should be more robust in 2021, and with the current low or negative real interest rate, we should see a healthy investment demand for silver to continue in 2021 and the foreseeable future.

The global silver demand is expected to reach 1,155 million ounces in 2025, growing at a CAGR of 2.98%, for the time period of 2021-2025 according to the Global Silver Market Report. While the silver supply is likely to be recorded as 1,062 million ounces in 2025, increasing at a CAGR of 1.26%, during 2021-2025. Factors such as rising sales of jewellery & silverware, growing demand for solar photovoltaic, rising use of silver oxide batteries, increasing manufacturing of electrical equipment, and expansion of dental services will drive the growth of the market. However, the market growth could be challenged by volatile prices of silver and the environmental impact of silver nanoparticles. A few notable trends may include rising use of silver in the auto industry, growing consumption of silver nanoparticles and upsurge in the silver consumption in the U.S